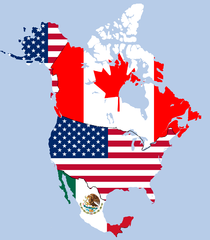 Trump’s threat to cancel NAFTA and the series of negotiations that the threat spurred, has been one of the most important issues facing Canada. In 2017, it was the most polled issue  in 2017 and Canadians believe in trade, or at least that is what they tell pollsters. And the attention to NAFTA has helped Canadians come to the view that NAFTA has largely benefitted us.

The commitment to free trade is consistent with a more internationalist outlook among Canadians. Free  trade, however, is an abstract idea that relies on a relatively sophisticated understanding of the economy or a faith in the idea that is hard to link to observable things in one’s day to day life. It seems unlikely that the significant role of resource exports would itself drive support for free trade outside of resource dependent areas of the economy.

Most importantly, as free trade sorts sectors and businesses into winners (benefit from trade) and losers (jobs are lost in uncompetitive, unprotected sectors), we would expect the losses to be more visual than the wins.

There is no question that Canadians value free trade. A 2017 global Ipsos poll found that Canada is the 8th most supportive of free trade of 24 countries polled. Fully 89% either strongly agree (56%) or somewhat agree (33%) that “Free trade is beneficial for my country’s economy.”

The historical tracking by Environics shows that free trade did not have majority support in the immediate aftermath of the negotiation of the FTA and at times only one in four Canadians supported it. After NAFTA came into force, however, support for the agreement rose slowly and reached as high as 60% in 1994. Free trade became part of the status quo — and with none of the major parties or provincial governments making it a political issue, Canadians were left with little reason to move off their support for free trade.

Fast forward to the Trump election. While trade disputes from softwood lumber to pork have occasionally sparked up, Trump’s attack on NAFTA had the potential to not only change the economic realities for Canadians but offered up a chance to rethink the value of free trade here.

Does raising questions about the agreement bring out the protectionist element in Canada? The answer is that while Canadians have stayed true to the idea over the last couple years, they have not enthusiastically answered positively when asked to evaluate the deal.

The figure below shows the level of positive answers to 13 questions (12 unique) asked over the past two years by a number of polling firms. The highest level of support was provided to an EKOS question that asked only about the concept. While question wordings and options affect the overall distribution, many Canadians are skeptical about the benefits of the NAFTA agreement for Canada. For example in an Ipsos/Global News poll, 74% of Canadians support being in NAFTA but only 56% think NAFTA has benefitted Canada.

From the range of questions asked, three observations can be made (1) it is easy to overstate the support for NAFTA; (2) there is some skepticism about how much Canada has benefitted from free trade; and, (3) outright opposition is weak with unsure answers prevalent.

An Ipsos/Global news poll in July of 2017, asked the question of whether Canada has benefitted or not. Clearly more than half (56%) think Canada benefitted but this is lower than the 74% who support Canada being part of NAFTA. Canadians with higher levels of household income, more education are more likely to perceive benefits. Men are also more likely to think there has been benefit.

The Ipsos poll showed more support for the idea that Canada has benefitted than earlier Angus Reid Institute surveys.  In the summer of 2016, Only 25% of Canadians felt that NAFTA had benefitted Canada, while 26% thought the impact was to hurt Canada. By February of 2017, Canadians had moved decidedly to the view that NAFTA had benefitted Canada (44%). As the public was exposed to the debate about NAFTA, it moved in a more positive direction.

In September of last year, the Angus Reid Institute asked the question differently, which helps understand what Canadians mean by the concept of benefit. Asked to evaluate the impact of NAFTA on different aspects, the economy is perceived to be the main beneficiary of NAFTA while individual benefits in terms of household income and career/ work opportunities were not impacted.

While Canadians see the benefit of NAFTA, they actually think the United States has been the biggest beneficiary. An Ipsos poll conducted in the summer found 34% who thought the U.S. benefitted the most. Only 6% though Canada did. Nevertheless, 34% took the option that all three benefitted. A Forum poll, which did not have the all three option, had a more decided U.S. view and more people who were not sure.

The tendency to think someone else benefitted more is a probably a natural reflection of concern/skepticism but it is important in the context of the demand from the U.S. for Canadian concessions on trade. Looking at this will make it hard for the government to sell concessions.

At a high level Canadians are committed to NAFTA and free trade, but it is not a universally held view (especially among those with less education or income). It is also accompanied by a skepticism about the real impact and the comparative impact of NAFTA on Canada. Since few Canadians felt NAFTA has affected their personal life chances, the future of NAFTA will likely continue to be a macro political topic.