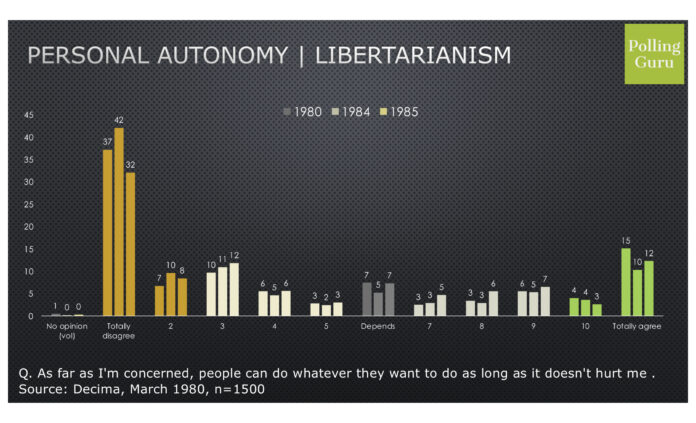 The 1980s are an interesting decade. Baby Boomers entered the workforce, got married and had kids. The decade began with the Cold War still on-going. There was no internet and the technology revolution that would fundamentally change how we communicate was still the stuff of science fiction. Perhaps not surprisingly, few Canadians viewed personal freedom as an essential value.

An unconventional, 11 point, scale captured the level of agreement.

Canadians were not particularly open to the idea. More than 3 in 10 (depending on the year) totally agree. Over time, there is some softening of the opposition. A thawing of sorts.

The disagreement with the idea that people can do whatever they want is consistent with the unwillingness of Canadians at the time to legalize same-sex marriage, abortion, prostitution. And the evidence of a thawing between 1980 and 1985 foreshadows changing views on these specific topics.

In the 1980s one of the key polling firms was Decima, whose Decima Quarterly, was a regular omnibus telephone survey. Each survey had a sample size of 1500. Data obtained through the Canadian Opinion Research Archive (CORA) at Queen’s University. Neither CORA nor the original data collection company bears any responsibility for the analyses or interpretations of the data presented here.

[CORA Archive] Are you a feminist?