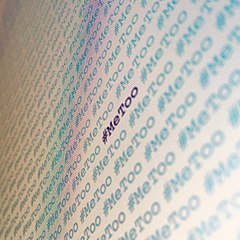 It has been on our minds for sometime. Politicians, members of the media, and the entertainment industry have all been implicated with sometimes decisive implications for their careers. The danger of judging those accused in the media and how and if we can possibly have a reconciliation that acknowledges the past and moves forward in a better way are all important.

A new poll by the Angus Reid Institute drives the focus, perhaps, away from high profile stories to the reality of a workplace culture that systematically impacts half of the population. The full report, which is extensive, is worth a view but here are some highlights.

Three in ten Canadians think the discussions around these issues have “sparked a major and permanent shift”, while 55% think it will lead to some change. Only 14% are pessimistic and suggest that nothing will really change. 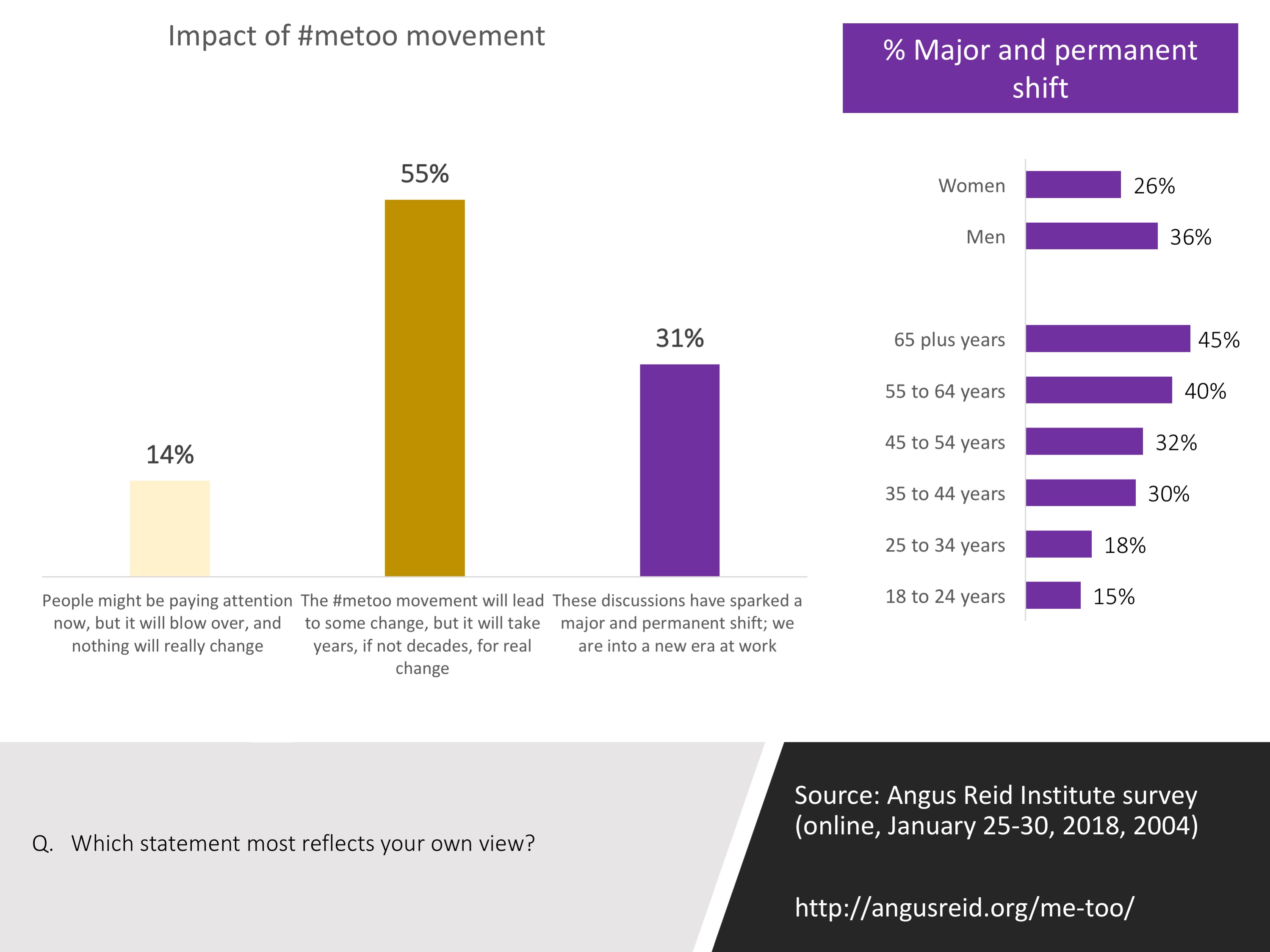 Overall, Canadians have a positive outlook about the #metoo movement and its impact. A large majority agree that The #metoo discussions are long overdue (33% strongly and 53% somewhat) and only 28% agree that the issue is overblown and receives more attention than it should (5% strongly and 23% somewhat). These are strong indicators that the public thinks these are important and positive conversations.

Nevertheless, one of the areas of contention in the movement is around the issues of the impact of the accusations. In this area, the public generally agree that people’s careers are being ruined without due process or a chance to defend themselves (23% strongly and 49% somewhat). While men (78% net agree) are more likely than women (68%) to agree, even among women this idea resonates. It also speaks to the value of due process and the danger of media trials even as Canadians want perpetrators of harassment to suffer the consequences.

One of the interesting findings is what Canadians think is acceptable versus unacceptable at work. A total of 24 behaviours were tested and there is a wide range of acceptability. The chart below shows the percentage unacceptable and usually unacceptable for all 24 items. 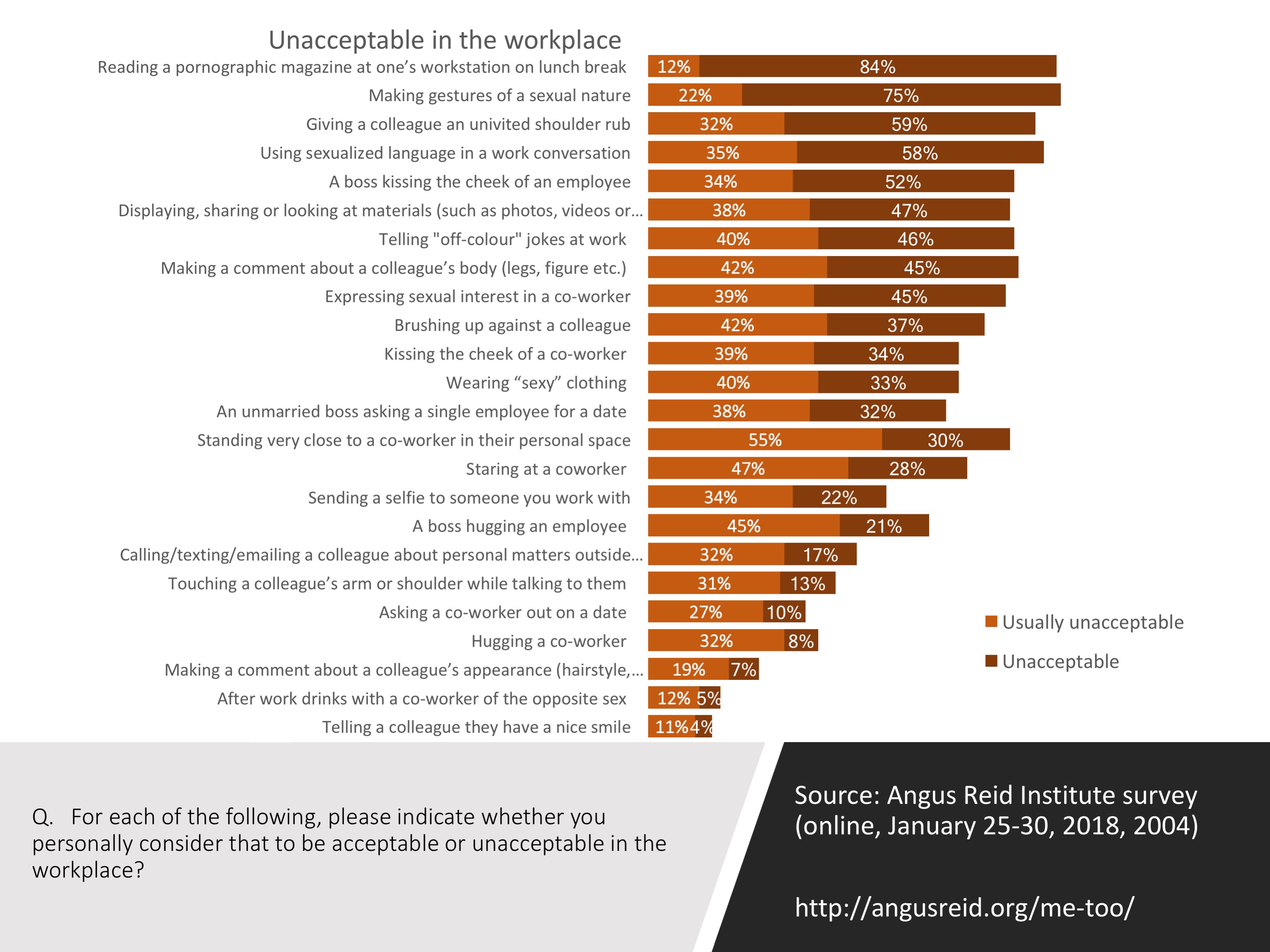 It is easy to address the issues that we all agree on are totally unacceptable but the large proportion of behaviours that are acceptable in some circumstances creates the ambiguity that might make creating a more inclusive and fair workplace for everyone harder to achieve. The same behaviour could be viewed as acceptable in one case but not another and by one person but not the other in an interaction. And, of course, if there are power relationships involved the implications of this ambiguity are heightened.

An interesting finding in looking at many of the behaviours identified by the Angus Reid Institute is that it is younger men, not men in general, who are the most likely to view the behaviour as acceptable. For example, while giving a colleague an uninvited shoulder rub is considered acceptable by 9% of Canadians, men under the age of 35 are much more likely to say acceptable (19%). Older men and women tend to be around the average for the population as a whole.

Given this, Canadians may be quite realistic in thinking that change will not come easy.

Source: The survey was conducted by the Angus Reid Institute online from January 25th to January 30th, 2018 among a representative randomized sample of 2,004 Canadian adults from the Angus Reid Forum panel. Additional information available here.